What they wrote about Pontrhydfendigaid

On the whole, early Welsh travel-writers tended to write favourably about the village of Pontrhydfendigaid and surrounding districts. This was in direct contrast to English gentries such as Malkin, Roscoe and Barber (and even George Borrow) who were not particularly complimentary about this corner of Wales. Generally, they were always unimpressed with something or other – the mountains, the weather or the local inhabitants. These tourists had little knowledge or true interest in this part of the British Isles and this was reflected in their writings. Their main fascination was with Strata Florida and they were inclined (and rightly so) to wax lyrical about this historic site. Rarely did they pay much attention to anything else in the area.

Most of the ‘Welsh travellers’ who wrote about Pontrhydfendigaid did so at a time towards the end of the 19th century or early 20th century. The following two authors are worth reading, particularly, their comments about the village and the countryside around Ystrad Fflur. Click on the following headings: 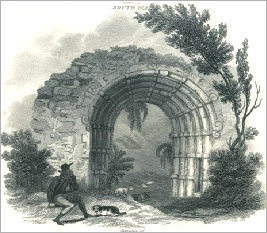