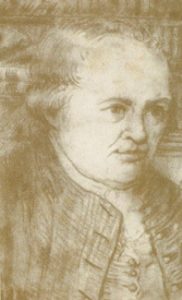 Edward Richard lived about two miles west of Pontrhydfendigaid at Ystradmeurig, on the road to Aberystwyth. Very little is known about his private life, which he fiercly protected. The most authoritative account we have of his work and legacy is that by D. G. Osborne-Jones, published in 1934 [1] However, Osborne-Jones hymself admitted that writing . . . a satisfactory account of Richard, his family and his celebrated school was a task of hazard and difficulty’. The records he said were meagre and scrappy. It seems that Edward Richard was intent on leaving behind no lasting remnants relating to his private life or that of his parents. Following his death, no diaries were found, no written notes of any kind, and of his literary activities, Saunders Lewis wrote [2]:

. . . all  that we  have is what little  he chose to  preserve.  Of the rest,  songs of his youth and  cynghanedd  verse of his maturity, he left no trace.

However,  what is well known,  is that he  founded and endowed, out of his own savings, a free famed grammar school in Ystradmeurig which he bolstered with a well stocked library.  He was a highly acclaimed classical scholar, a renowned Welsh poet and a key figure in a Welsh eighteenth-century literary circle, referred to by Saunders Lewis as a ‘School of Welsh Augustans’.

As a teacher, he was recognized as a pioneer of higher education in Wales and was responsible for educating  a number of talented students who went on to play an important role in many spheres of life, both in Wales and further afield. Of all of his students, one of his most ablest intellect was Evan Evans (Ieuan Brydydd Hir or Ieuan Fardd), a pre-eminent Celtic scholar.

His life’s work was very much concered with teaching and  with providing quality education  for the young people of Wales  at his school in Ystradmeurig. His committment to education was absolute and in his final endowment to his school  before his death he spelt out that his successor as master should be qualified :

. . .to teach the Greek and Latin, as taught in the principal grammar schools in England, so that boys therein instructed might be qualified for the Universities of Oxford and Cambridge.

Edward Richard, the bard has been reviewed by Saunders Lewis in his book ‘A School of Welsh Augustans’ ; he described the first of Edward Richard’s two famed pastorals as having a :

In fact, the bulk of Richard’s published work has a distinct local character, with the lowlands and mountains around Ystrad Meurig and Ystrad Fflur as their main settings. This makes his work especially interesting, because it sheds a little light on this remote corner of Cardiganshire, as it was some 250 years ago.

Edward’s earliest surviving literary activity dates from 1760 when he wrote his original bridge song written  when the first stone bridge  was built over the Teifi and the ‘blessed ford’. He saw this as a historical investment in the future of the ‘little village’ of Pontrhydfendigaid. At the time, he was full of anticipation and optimism and was looking forward to something rather special — a fine, well-dseigned bridge worthy of crossing a ‘blessed ford’. What’s more. he was sure that it would bring with it material wealth and make the village prosper and flourish over time (tros fyth yn gyfoethog).

Of course the bridge did lead to many positive outcomes,  but it did not bring with it the prosperity which Edward Richard had forecasted and expected. One year on, he  was totally disillusioned. with the whole outcome, and  his second song reflects his bitter disappointment – the bridge was woefully narrow, humpbacked and, all in all, a big hideous monsttosity (hen fwbach erchyll).

These songs are of particular interest in that they make it possible to work out, with a fair degree of certainty, the year the first stone bridge was built at Pontrehydfendigaid. Stone bridges  were a rareity at the time and not often seen in the countryside far outside county towns. These songs give us an indication of what the bridge looked like and why it was built in the first place.

In the Welsh literary world, Edward Richard is  known as  the author of some of the best specimens of pastoral poetry in the Welsh language. His first  was published in 1765  and his second in 1776, one year before he died. Theywere on the plan of  the pastorals of Theocritus and Virgil and are claimed to be the first of their kind in the Welsh language.  These  two pastorals, together with two other songs and some hymns, were published, with a biography, in 1811 under the title of Yr Eos: sef Gwaith Prydyddawl Mr. Edward Richard Ystrad Meurig, gyda hanes ei fywyd, London, and reprinted at Carmarthen in 1813, 1851, and 1856

An ancient Roman poet of the Augustan period ; traditionally thought of as one of Rome’s greatest poet

To have written two long poems based on  pastorals by Theocritus and Virgil, indicates an in-depth knowlege of the classics. Sandures Lewis was in no doubt and he wrote:

. . . the strongest witness to the thoroughness of Richard’s classical studies is the incomplete catalogue of his library in which Greek and Latin texts easily predominate, and one thing we learn from it is that he possessed five editions of Theocritus, together with Creech’s English translations. To have possessed five different editions of Theocritus is evidence enough of Richard’s love of him. Another book in the catalogue is a copy of the works of Moschus and Bion. Virgil, of course was Richard’s constant study