A glimpse of Pontrhydfendigaid today (2020)

As indicated earlier (page 3),  J.G. Wood’s drawing of the Rhydfendigaid bridge in 1811 seems to be at odds with what Edward Richard wrote in his second bridge song (1762). The two versions are irreconcilable and, either Edward Richard is guilty of gross exaggeration or the postscript in Yr Eos [25] — referring to the bridge still standing to this day (1811) — is mistaken.

A new bridge erected in1810 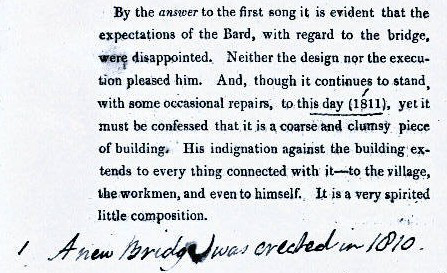 The Reference Section in the City of Cardiff Public Libraries has a unique copy of the 1811 edition of Yr Eos [26]. It is the only copy where the preface (a short account of Edward Richard’s life) is signed, in ink, by the writer – John Williams, headmaster of the Ystradmeurig school from 1777 to 1818 [27]. This copy was presented by John Williams to the Rev. W.H. Barker A.M. with the words (again, in his own hand writing) :

To the Rev W.H. Barker A.M. with the respectful compliments of the writer of the following account

By 1841, this particular copy had found its way to a David Lloyd (?) who added a hand-written note of his own, saying that ‘A new Bridge was erected in 1810’ [see opposite].

If true, then the postscript (above) has to be erroneous, and it is conceivable that Wood’s print may, in fact, be that of a ‘new bridge’, and not the one described by Edward Richard.

Actually, there is another quite specific and independent reference to a ‘new bridge’ at Rhydfendigaid. A collection of miscellaneous cuttings, relating to Cardiganshire, in the NLW, contains a poem by John Hughes (1787-1860), Llwyn-glâs, Llanfihangel Geneu’r Glyn [28]. It is called ‘Clod i Bont Rhydfendigaid’

There is no record of when or where ‘Clod I Bont Rhydfendigaid’ was published, but it is known that John Hughes was educated at Ystrad Meurig in the days of John Williams (the headmaster referred to above and affectionately called Yr Hen Syr), and that he was in his last full year at school in 1809. It is possible that he may have continued his studies for part of the following year before taking up a teaching post at a school in Putney. Many years later, in 1859, he was made Archdeacon of Ceredigion.

Unlike ‘Edward Richard’s bridge’, the new bridge  was wide – wide enough to allow three substantial carts or carriages to pass each other, without the wheel hubs being damaged. 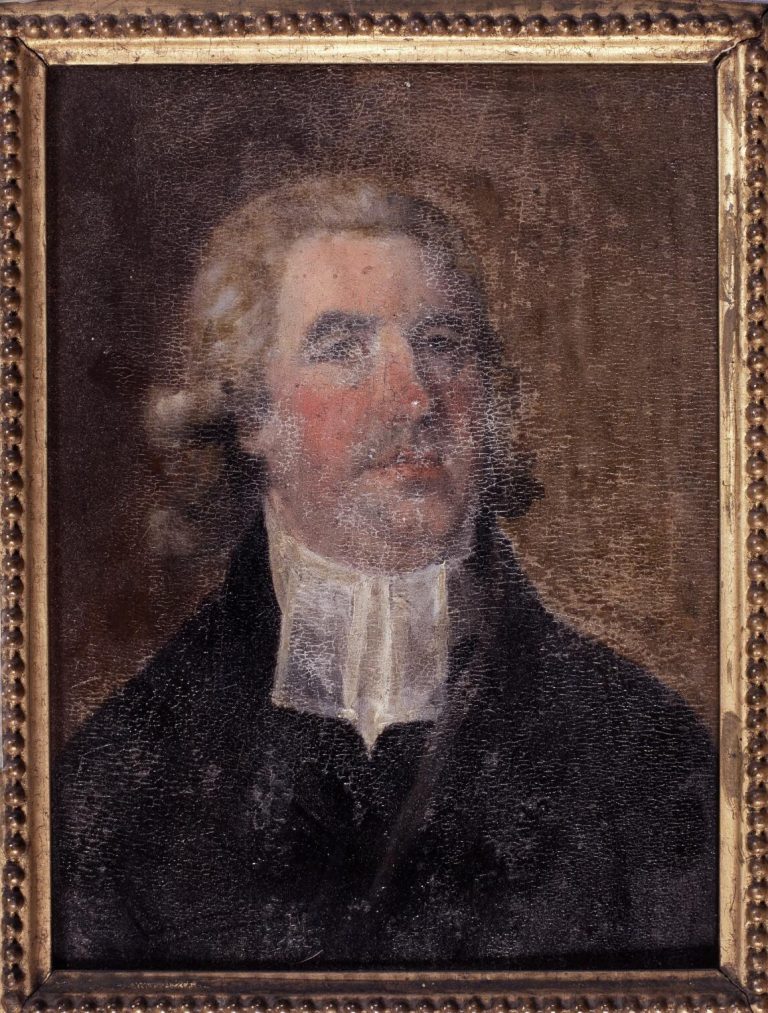 He was born at Llwyn Glas, Llanfihangel-geneu’r-Glyn, near Aberystwyth, in 1787.  He was educated at Edward Richard’s school in Ystradmeurig where he distinguished himself as a classical scholar. After that he spent eighteen months, an assistant master at a school at Putney before being ordained deacon and priest by the bishop of S. Asaph. His first curacy was at Llandrillo-yn-Rhos, Colwyn, Denbighshire,  followed by extended periods of time as curate of Foleshill, near Coventry and later of Deddington, near Oxford.  Returning to Wales, he became incumbent of Aberystwyth and, at the same time, curate of Llanbadarn-fawr.  In 1833 became the vicar. The bishop of St. Davids appointed him to a prebendal stall at Christ College, Brecon, and in 1859 Connop Thirlwall made him archdeacon of Cardigan, both appointments which he held until his death1860

For further details of his life and work, click on the adjacent portrait.

The ‘new’ bridge was wide and strong

The emphasis on ‘width’ strongly suggests that the ‘first bridge’ may have been a simple pack-horse bridge. These were narrow, low sided and intended for pack horses, horse drawn sledges, riders, livestock and pedestrians. They were seldom more than a couple of metres wide and the parapets were low so as not to interfere with horses’ panniers but, on the other hand, high enough to prevent the animal stepping off the edge. Some, including the famous  Pontypridd bridge (not strictly a pack-horse bridge) had a very steep entry and exit and this was one aspect of the Rhydfendigaid bridge which really did disappoint Edward Richard. However, despite all the limitations of this type of structure, one would imagine that it was quite adequate for the traffic needs of the time ; after all, there were very few wheeled vehicle travelling through Rhydfendigaid in the mid 18th century [29] : 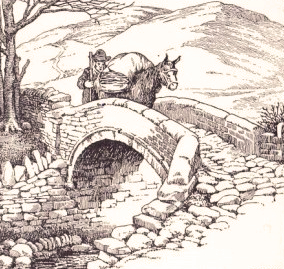 Until the late 1700s, Ceredigion had very poor roads and was said to be the most remote county in Wales . . . There were very few wheeled vehicles in Ceredigion before about 1780. The majority of people walked, or rode on horses or ponies. Goods, including thousands of tons of lead ore, were transported in panniers on ponies while agricultural produce was dragged on sledges

Typically, pack horse bridges were narrow with low sides (or none at all) to avoid damage to the panniers (see opposite).  The Edward Richard bridge also had low parapets, but it also had a relatively long span resuting in a  very much steeper hump-back than that shown opposite.

Was the old bridge demolished or revamped?

Although both the above accounts refer to a new bridge, it is difficult to imagine that the old ome was totally demolished and a completely new structure built in its place ; that would have been costly. Gwyndaf Rees says that where a stone bridge was re-newd then the usual tactic was [30] :

. . . to widen it . . . doubling the width not only made it wide enough to allow coaches and carts to pass each other, but in effect also provided a new bridge at half the cost.

The term ‘new’ is often used loosely in everyday language when referring to something that has been renovated or revamped. Gwyndaf Rees  (above) refers to an improved bridge as a ‘new’ one. So it is not unreasonable to assume that the ‘new bridge’ referred to in Yr Eos and by John Hughes was, in fact, the original, but radically changed to improve its functioning and appearance. This view is supported by the Quarter Session records for April 1809 [31] which refer to repairation and amendment – not a new bridge. The entry for that session held at the Shire Hall, Cardigan on the 12th of the month reads as follows :

Whereas a certain Bridge in the county called Pont Rhydfendiged was at this present Quarter Sessions of the pease presented to be out of repair and that the same ought to be repaired at the expense of the inhabitants of this county. It is therefore ordered that the repairation and amendment of the said Bridge be referred  to John Jones Esq, John Lloyd Esq, James Pillipps Lloyd Esq, William Cobb Gilbertson Esq and John Jones of Penybont Gent. And that they or any two or more of them be desired to contract and agree with proper artificers and workmen for the repairation and amendment of the same and that they certify such contract to the next or some subsequent Quarter Sessions of the peace to be held and kept in and for this county.

The Quarter Session records also refer to a Mr Charles James being paid thirteen guineas for surveying the Rhydfendigaid and Pontygamddwr bridges, drawing plans and providing an estimate of the repairs to the said bridges. It appears that work on the former was completed sometime in 1810. On the 11th July of that year, the treasurer of the county was ordered to pay Mr John Jones Penybont  (Tregaron?) the sum of £100 to cover the cost of repairation and amendment of the Rhydfendiged bridge :

Ordered that the Treasurer of the county pay . . . John Jones of Penybont . . . the sum of one hundred pounds to be by him paid and applied towards repairing and amending a certain bridge over the River Tivy called Pont Rhydfendiged presented to be out of repair at the Easter Quarter Sessions, One Thousand Eight Hundred and Nine.

Significantly, the above figure of £100 is less than the actual cost of the ‘original bridge’, which was £126 in 1760. This again supports the view that the 1810 bridge was, in fact, an extension of the original, that is, amendment as the records suggest. There is no information relating to what was actually done, but it is clear from John Hughes’ account that, in addition to increasing the width, the height of the parapets was also raised :

Interestingly, it seems the ‘humpback problem’ was not entirely resolved in 1810. Despite all the improvements, eleven years on there is note in the Quarter Session Records stating that a certain Lewis Morgan was paid a sum  of twenty five pounds . . . for filling up the ends of Rhydfendiged Bridge. Over a century later those ends had to be further filled-in (again to trim the humpback) so as to accommodate the 1930s sightseeing buses (charabancs) ; they were apt to become wedged and stuck on the uppermost section of the bridge. This seems to have been the last noteworthy amendment to the Rhydfendigaid bridge. However, further changes and improvements are needed if it is to continue carrying large, heavy modern lorries and cars and, also, ensuring safe passage for pedestrians.