The bridge that gave the village its name

When was it built?

The  image opposite was taken from a book by the Rev. John George Wood (1768-1838) called  The Principal Rivers of Wales. It was published  in 1813 and included a series of views along the length of all the main Welsh rivers, from source to the sea.

J.G.  Wood, was a highly successful writer and  a good second hand copy of his book will cost around £2000 today 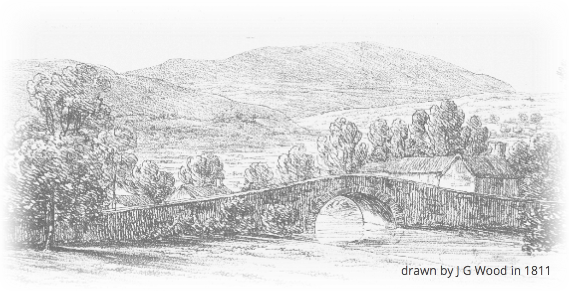 In 1931-32, Edward Jervoise [1] undertook a survey of the ancient bridges in Wales and his findings were published in 1936. He looked at all the crossings spanning the river Teifi and he concluded that Pont Rhydfendigaid (the Bridge of the Blessed Ford) was neither ancient nor worthy of a mention. The Teifi, he said :

Gwyndaf Breese [2] likewise, in a recent publication, ‘The Bridges of Wales’, dismisses it in a couple of sentences :

This . . . is a ‘humped’ single arch bridge built of small outcrop stones. It has no special features and is well under one hundred and fifty years old.

Breese’s remark about the age of the bridge is wide of the mark.  J.G. Wood’s book, the ‘Principal Rivers in Wales’ [3], includes a sketch of Pont Rhydfendigaid, drawn in 1811 and CADW contends that the bridge dates back to the 18th century [4]. Exactly when it was built however  is a bit of a mystery. Ask local people and the answer, more than likely, will be blwyddyn y tair caib (the year of the three pickaxes), that is 1777. D.C. Rees, in his book on Tregaron (1936) [5], claims that three of the stone bridges over the Teifi were built by his great-great-grandfather and great-grandfather, and that one of them was :

Jevoise and Breese may well be right that the bridge has no special or interesting physical features. However, it does have a notable and unique place in the history of Welsh literature, thanks to Edward Richard who wrote two poems about pont Rhydfrndigaid – ‘Cân y Bont’ (Song of the Bridge) and ‘Ateb i Gân y Bont’ (A Reply to the Song of the Bridge) [6]. These are considered to be the first of their kind in the Welsh language, and Saunders Lewis [7] says the significance of :

. . . the Bridge poems is that they are in the measure of the later pastorals, and that they occasioned an interesting correspondence with Lewis Morris about poetic diction.

These two songs are also of interest in one other respect ; with the aid of these, and the correspondence between Edward Richard, Lewis Morris and Evan Evans (Ieuan Brydydd Hir) [8], it is possible to work out, with a fair degree of certainty, the year the bridge was actually built.

Evan Evans was born  20 May 1731 at Cynhawdref farm about a mile from Swyddffynnon in the parish of Lledrod, Cardiganshire. He received his early education at Edward Richard’s school in Ystrad Meurig. In 1751, he left Ystradmeurig and entered Merton College, Oxford but left without graduating. 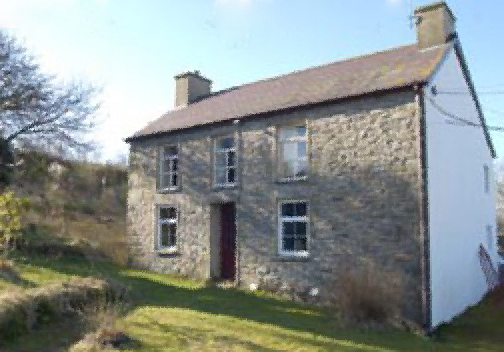 The first song was written around the time when it was agreed that the cost of building and maintaining the bridge would be borne by the County, rather than the parishes bordering the river (i.e. Caron and Gwnnws). Apparently, the families of Trawsgoed (Crosswood), Nanteos and Mabws were instrumental in procuring this concession [6].

This must have been an unexpected, but welcomed relief to the community and Edward Richard in his first song pays tribute to the representatives of the above families for their hospitality and friendly condescension [5] – or in other words, for graciously lowering themselves to help  people less  important than themselves.  He exhort the freeholders and tenantry of the parishes . . . to fidelity and gratitude (see adjacent inset and reference [6])

Edward Richard pays tribute to the families of Trawsgoed, Nanteos and Mabws for securing the bridge for the village

The first . . . son of David John Oliver, called here yesterday as drunk as a slater, who told me that he had no letter from you, but he had his message in his head ‘What is that’ said I? ‘Here it is’ said he, and sung out, with a loud voice, an excellent song made on Pontfendigaid.

Maybe, at that time, the song was still in the draft stage and Edward Richard was not quite ready to send a copy to Lewis Morris for scrutiny. Whatever the explanation, it was the 11th February 1761 before Lewis Morris was able to affirm [11] :

Yes, yes ; and I have also received Canu’r bont.

Lewis Morris was a Welsh  hydrographer,  antiquary, poet and  lexicographer, the eldest of the Morris brothers of Anglesey. His bardic name was Llewelyn Ddu o Fôn and was a close friend of Edward Richard. They were two leading members of a very  small select group  of  Welsh scholars and poets  who wrote letters to each other, passed their poems around for critical analysis and approval.. Saunder Lewis referred to this mid-18th century literary circle as a School of Welsh Augustans. Their influence :

. . . on modern Welsh literature was decisive, and that is all the stranger because they lived and wrote while the great religious revival was re-shaping the entire life of Wales . They looked at it with distain – they were Augustans

Lewis Morris’ letters clearly show that the first song (Cân y Bont) was written sometime in 1760. According to Saunders Lewis [7], it was usually during the respites from teaching that Edward Richard found leisure for poetry and, it seems likely, that he wrote the initial draft of over the 1760 summer holidays. At that time, work on the bridge must have been progressing rapidlly and the bard was looking forward to completion, and implies in his song that this is imminent (ar fyr cewch ei gweled). He is full of anticipation and optimism and he predicts economic prosperity for the little community.

His second bridge song, however ‘Ateb i Gân y Bont’  (his answer to the first song) is both surprising and unexpected  – see Page 2