Who blessed the ford and gave the village its name?

According to this theory of mine . . .  the blessed ford was not . . . the last ford on the road to Ystrad Fflur, . . . but I venture to suggest that . . . Rhydfendigaid . . . received its name when pilgrims were travelling to the old abbey situated about a mile to the south of the village . . . It might be that Rhydfendigaid was the blessed ford because it was the last on the road to the old Abbey, and possibly because there were stepping-stones across the Teifi at that last spot.

An old abbey on the banks of the Fflur

Though the evidence for the existence of a pre-Cistercian abbey on the banks of the Fflur may be slight and tenuous, it is nevertheless worth summarizing and assessing.

Stephen Williams, whose work on the history and architecture of Strata Florida is widely acknowledged, claimed that Rhys ap Tewdwr [7] founded a monastery for monks of some order on the banks of the Fflur, sometime during his reign as king of the Deheubarth (1078-1093).  When directing excavations at Strata Florida in the late nineteenth century, Stephen Williams took time out to investigate the old abbey site. Thomas Jones, the resident farm tenant at the time, showed him the area of ground covered by the foundations of the alleged abbey, including the all-important abbey church. Fragments of the church walls, he said, could be seen protruding above ground level before he had them cleared (see image opposite) to extend his use of the land for agricultural purposes. He estimated that the church would have been about 126 feet long by 42 feet wide.  Stephen Williams concluded, on the basis of what he had seen and been told, that this spot must have been, at one time, the site of a significant religious house, although it could not be compared, he said, in size or splendour with its successor near the Teifi and Glasffrwd.

In a field close to the Old Abbey farmhouse, a significant mound of rubble may be seen piled up at one end near a place called Henllys. It is highly likely that this is the mound that Thomas Jones referred  to, and includes the remains of the old abbey which he cleared to extend the land for agricultural purposes. According to local tradition this is also the field  where the old abbey once stood, conveniently positioned near where two minor brooks merge – the Gorphen and the Fflur

It has to be stated however that a geophysical survey of the site by Jemma Bezant in 2007 [8] failed to confirm the presence of any substantial stone structure that matched Stephen Williams’ account.  Plainly, the latter’s version of things is unproven and there is no solid documentary proof linking Rhys ap Tewdwr with an old abbey named Ystrad Fflur. On the other hand, there are some written references which appear to underpin  Stephen Williams’ belief. A few of these are noted below.

Bleddin ap Maenarch was buried at Ystrad Fflur or Strata Florida abbey in Cardiganshire, which was built by his brother-in-law Rhys ap Tewdwr

The author gives no authority for his claim. However, it is known that both Bleddin ap Maenarch and Rhys ap Tewdwr died in battle against the Normans in 1093. There is no obvious reason to doubt Theophilus Jones, and it is possible that the two were buried in the same monastery which, of course, would have to be the ‘old’ abbey near the Fflur.

Stephen Williams also suggested that Rhys ap Tewdwr’s old abbey may have been :

. . . in a ruinous condition owing to  the long-continued wars in which the country had been engaged . . . since his death, and that . . . the Cluniac monastery as it was called by Camden, became merged in the new foundation for the Cistercian order [12].

It is not an unreasonable argument. When Robert fitz Stephen (then lord of Penardd) offered Whitland abbey a modest endowment to found a daughter house in the commote of Penardd, it would have been expedient for him to prevail upon the beneficiaries to take over an ailing monastery within the commote. The later would have a ready water supply and, presumably, stone buildings, at least, suitable as temporary accommodation. Certainly, it was not unknown at the time for some extant monasteries to become established Cistercian houses.

While the above testaments may only be faintly conceded, there is additional, perhaps more persuasive, evidence to support S. M. Powell’s claims. There are local place-names and landmarks that point to an ancient north-south route through the village, leading directly to the old abbey site. The latter crosses the Teifi a short distance below the present bridge [Figure 1]. Whether this crossing is the original ‘holy ford’ is considered next.

The blessed ford and the ancient path to the old abbey

One hundred years or so ago, Pensarn was a very familiar local name in Rhydfendigaid. It was the name given to a strip of land and some old dwellings (now long demolished) close to where the river Teifi flows through the village [Figure 1]. Sarn is a well known name, meaning stepping stones for crossing shallow water (or wet marshy ground), and it is tempting to conclude that Pensarn would have been near to the initial ‘holy ford’. 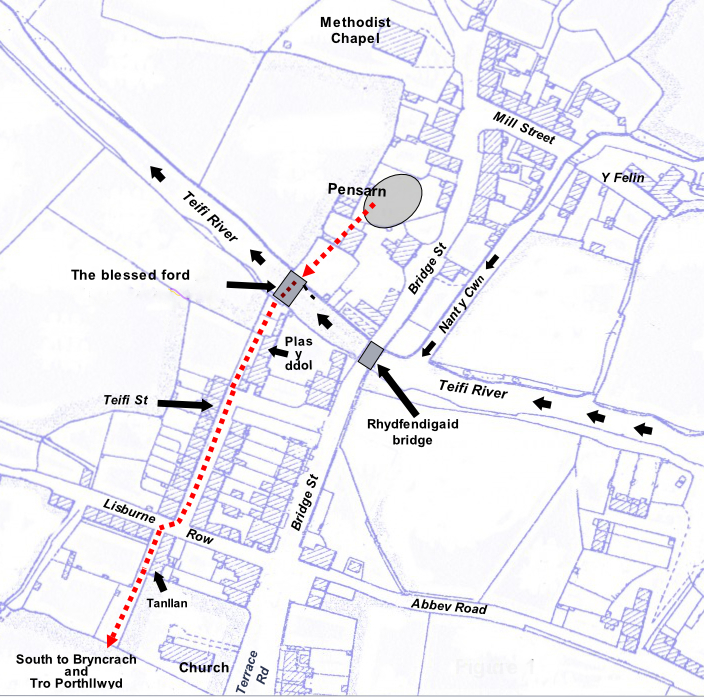 What’s more, prior to the present bridge being built and the road re-directed in 1760 [13], the main route through Rhydfendigaid was along one of the oldest village streets, called Teifi Street. There are clear telltale signs, even today, of a pathway running from the river to Teifi Street and beyond. It starts near shallow waters close to Pensarn, roughly fifty yards below the bridge ; it goes on for about  sixty yards, past an old, long-standing house called Plas-y-ddol, to join the lower end of Teifi Street.

On reaching the top end of the street, it crosses Lisburne Row and then on to, what is to-day, a short cul-de-sac (about twenty-five yards long), ending opposite a private-property called Tanllan. Doubtless, it would have continued (before the road was re-routed) in a straight line, beyond the cul-de-sac, towards Bryncrach. From there, it would, probably, have followed the same route as the present B4343 which runs in the direction of the Old Abbey farm.

Again, roughly half-mile or so beyond Bryncrach and a short distance to the north of the Old Abbey farm there is a field called Cae Porth Llwyd.  In the early eighteen hundreds, it was also the site of a cottage called Porth Llwyd, where a certain Richard Evans and his wife brought up five children. What’s more, a sharp bend in the B4343 road, adjacent to Cae Porth Llwyd,  is still referred to, locally, as Tro Porth Llwyd. The name Porth, together with its Latin origin, suggests that this spot may have been, at sometime, a prominent gateway to an old religious foundation [14]. Figure 1 shows what was, undoubtedly, the main north-south track through the village before the present bridge was built in1760. Again, it is tempting to suggest that this was the route taken by ancient pilgrims to the old abbey before the arrival of the Cistercians [15]. 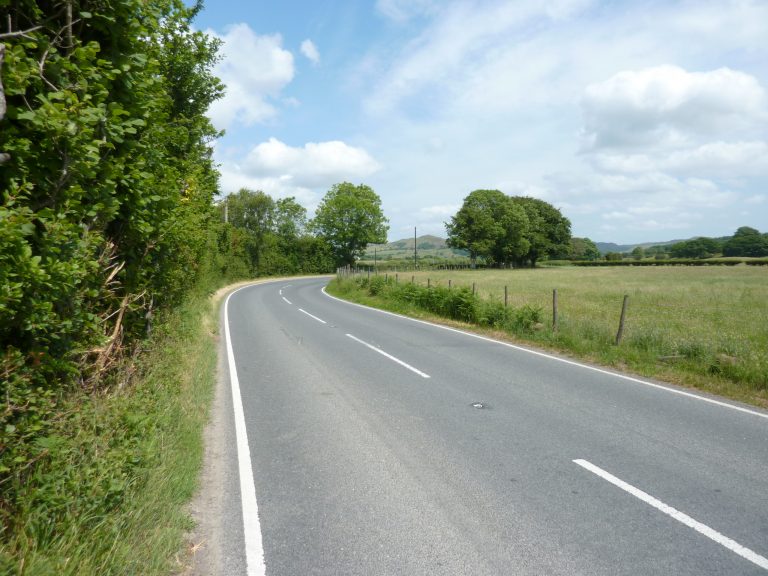 Who gave the village its name?