Letters written during a tour through south Wales

The next stage of John Evans’ journey took him to Strata Florida where  he saw a large mansion called Abbey House  which, he said, was occupied by a farmer.

Strata Florida Abbey, and the large mansion called Abbey House  which John Evans referred to in his writings 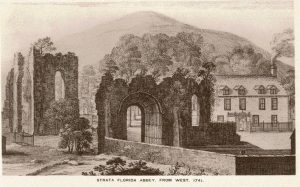 The next stage of John Evans’ journey took him to Strata Florida where he saw a large mansion called Abbey House which, he said, was occupied by a farmer. This house was the home of the Steadman family  (a noble family) up until about the mid-1700. Surprisingly, he made no reference to the Steadmans , but he did give a lengthy account of the Abbey and its history. He was very regrettable that there was :

scarcely a vestige of the splendid monuments that must have been erected at different times over the ashes of royalty.

From Strata Florida he followed the course of the river to :

a poor populous village called Rhydfendigaid, or the Blessed Ford, the Teivi being here fordable, but a bridge of stone has for ages been thrown across it.  (To read about the bridge click here)

He refers to the inhabitants of Pontrhydfendigaid as :

. . . a stout athletic race, principally employed in the surrounding lead mines and for the most part methodists.

However, he did qualify his comment by saying that :

most of these methodists alternately attended the church and considered themselves members of the establishment ; on the other hand, there were a few properly called dissenters.

The village had a meeting-house for methodist circuit-preachers [1] and such had been the increase in members in recent years that almost every hill exhibited a building like a barn, erected for the purpose of worship. The ‘Elenydd family’, referred to earlier, probably worshiped in one of these barns.

Interestingly, John Evans said that the mode of courtship, and the ceremony of the little wedding was the same as he had observed in north Wales. However, there was one big difference : here more attention was given to religion with the people having been :

. . . taught the criminality of having a community of wives, as well as being convinced  of its unreasonableness and impolicy

The result of all this, according to John Evans, is clear – there is much more order and decency in this part of the country. This is intriguing ; this perception of Pontrhydfendigaid and the people is at odds with that experienced by an unknown author who wrote in 1796 [2] ;

. . .  a village of no great repute, wherein dwell not many honest labourers – but robust athletic miners – of no religion, though I hope, reformation is began among them, as there is now of late a chapel built, for the use of a well qualified extempore preacher. The village, partly in the parish of Gwnnws, and partly in this (Caron), is called Rhydfendigaid, i.e. the Blessed Ford, from the river Teivi being fordable there, over which is a very old bridge of stone. It is to be hoped now, the inhabitants will not long contradict the name of the place, by their manner of living.

John Evans; perception of Pontrhydfendigaid is at odds  with that of an earlier author who wrote :

. . . a village of no great repute, wherein dwell not many honest labourers

If the above account is to be believed, the 18th century Methodist revival had either wilted and faded away in Rhydfendigaid by 1796 or, maybe, it had never taken off there in the first place. Whatever the reason, it is a bit surprising, bearing in mind that the village was not particularly far from Llangeitho, the home of the redoubtable Daniel Rowlands (1713-1790). However, it appears that the ‘unknown author’ had his/her wishes ; reformation did begin, and  Methodism was quite ‘trendy’ by the time John Evans was passing through some seven or eight years later. Judging from what the Elenydd’s ‘fresh-faced lady’ had to say, the village and surrounding district must have undergone a very significant social change in a fairly short period of time. However, things did tend to ‘blow hot and cold’ on the religous front in those days. If John Evans had  returned some fifteen or sixteen years later he might have been robbed by a band of thieves living in the village, but that is another story [3]. It is, also,  on record [5] that things were pretty wayward in the area in the 1850s :

Again, it appears,  that it took less than a year for attitudes to change once more – from being an errant lot in 1858 to devout Methodists in 1859. The present chapel was actually built in 1859, and it is fair to say that from that year on formal religion became, for many generations, a fundamental factor in the daily lives of most Rhydfendigaid people. Indeed, religious beliefs and practices became very deep-rooted, influencing almost everything in the community, from culture to individual status and  outward behaviour. Even in the late 20th century, the village assumed a hush and a godly stillness on Sunday ; all normal week-day activities were forbidden, and it was observed by literally everybody (chapel goers and non-chapel goers) as a day of worship and rest from work and play. The beautiful and impressive chapel shown opposite remains a testimony to the people’s strong allegiance to their religious faith. Even today, the doors of this chapel are still wide open on Sunday.

Next, John Evans tavelled south towards Tregaron. On the way he passed a lofty hill called Bannau Bron y Mwyn where much lead and silver ore were said to be lodged. However, the mine had been closed down for decades although some remains were still visible, including several deep shafts with openings to the east at Cwm Y Graig Goch. He could not explain why they had been abandoned, but suggested that the shafts may have become too deep, or flooded. Whatever the reason, the slopes were now clothed with woods which abounded with the bilberry, dewberry and raspberry. 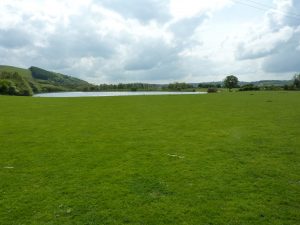 Less than a mile to the south, he came across the celebrated Ffynnon Elwad whose waters were famous for curing all the ailments of the female breast. Still further on, he passed Llyn y Maes (known as Maeslyn these days) where, according to tradition, stood the town of Tregaron whose inhabitants became so sinful and immoral that they were punished by God. One night the town was struck by a titanic thunderstorm ; lightning burnt buildings and people, and a devastating flood drowned those that had escaped the fires. The place has been covered and hidden, ever since, by a deep lake [5].

While John Evans’ account of some events may be doubtful, he has, nevertheless, managed to shed a little light on ordinary life in Rhydfendigaid during the latter part of the eighteenth century. Perhaps his books are not as entertaing as that of George Borrow, but they are certainly worth reading.