Railways were very much an accepted feature of the English landscape by the mid 1800. This was not so in Wales, although several projects were being mooted, in particular, an ambitious scheme to connect Manchester with Milford Haven :

Manchester was a thriving manufacturing centre, its wares sought all over the country and beyond. At Milford, there was a natural harbour with obvious potential as a port, being better suited than Liverpool to serve the growing commerce with North America [1]

Before any scheme could proceed, an Act of Parliament had to be passed describing the proposed development. In 1860, the Manchester and Milford Railway company  (M & M) received the Royal Assent for a section of the grand proposal – the section between Pencader and Llanidloes, shown opposite. The route was to pass through Pontrhydfendigaid, Ysbytty Ystwyth, Pontrhydygroes and Devil’s Bridge, and there was to be a branch line from Devil’s Bridge to Aberystwyth [2]. It took the company, however, another four years before starting any engineering work. 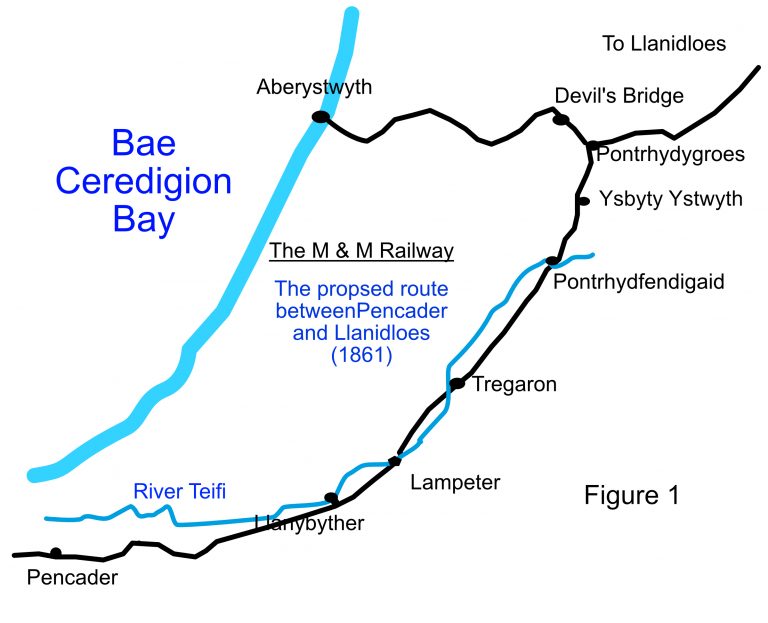 In April 1964, M & M entered into a contract with David Davies (Llandinam) and Fredrick Beeston for the construction of a 27 mile rail track from Pencader to Pontrhydfendigaid. The proposed extension from Pontrhydfendigaid to Llangurig was excluded from the contract because there were serious doubts at the time over the choice of route for that part of the scheme ; it was seen as a difficult section and likely to be very demanding and costly. 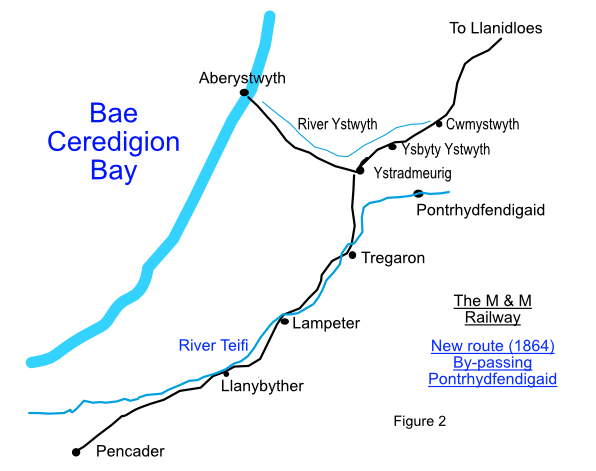 Following a re-appraisal, a new route was drawn up in 1864 (Figure 2). This was shorter – it went through Cwmystwyth and then down to Ysbytty Ystwyth.  From there it was to run towards afon Marchnant before descending down to the level of the Teifi. The new track followed a slightly different direction – to the west of the 1860 route from Ysbytty Ystwyth to Alltddu and then re-joining the original planned course.

North of Alltddu the line was to run across Cors Caron to a junction near Ystrad Meurig, off which there was to be a branch from the main line to Aberystwyth. According to J.S.Holden [3] this new route to Aberystwyth was essential since Devil’s Bridge was no longer on the main line.

It is said locally, that the decision to alter the course of the line between Alltddu and Ysbyty Ystwyth was forced on to the company by a local doctor or surgeon.

The local doctor or surgeon was Roland Rowlands and in the census returns for  1851 and 1861 he was recorded as a Member of the Royal College of Surgeons and married with one daughter and four sons. Around the time when the railway was being built he was about 50 years of age and  lived with his wife at No 2 Bridge Street (or Dolybont according to the 1851 census).  The story goes that he stubbornly refused to let the railway pass through his land leaving M & M no option other than to re-directing the line across Cors Caron.

This is a nice story – one man holding out and defeating a strong and powerful company. However, it is unlikely to be true. As indicated earlier, all proposed railway routes had to pass through a number of Parliamentary hurdles before being given the Royal Assent ; however, once this was given, the company involved had the power to compulsory purchase land, if necessary. Secondly, virtually all the land between Tregaron and Pontrhydfendigaid belonged to Lord Lisburne. He had tenants in Maesllyn, Allddu, Dolyrychen, Brynhope right through to Dolfawr and, judging from the tithe maps, it appears that all the fields in and around the village were also part of the Trawscoed estate. There was very little land that did not belong to Lord Lisburne and there was no reference to any fields owned by Roland Rowlands. Even if there had been, it is highly unlikely that they would be so strategically placed as to stop the line from being routed through, or close to the village.

While Rowland Rowlands may have had little or no say in M & M plans, this was not true of Lord Lisburne. He had a strong vested interest in the choice of route from Tregaron to Strata Florida. A letter in 1862 from a David . ? . , at the Crosswood Estate Office, Wenallt House to Lord Lisburne’s solicitors in London reads as follows [4] :

The proposed railway from Llanidloes to Pencader – or what is called the Manchester and Milford Railway – cuts up 4 or 5 of Lord Lisburnes farms to a serious extent . . . many acres of land about Pontrhydfendigaid that is now let at good rents as accommodation land.

The proposed railway from Llanidloes to Pencader – or what is called the Manchester and Milford Railway – cuts up 4 or 5 of Lord Lisburnes farms to a serious extent . . . many acres of land about Pontrhydfendigaid that is now let at good rents as accommodation land.

The company are now going to parliament for extension of the line and other matters. Do you think could there be any chance to get them to alter the line so as to avoid destroying the lands alluded to.

It would be very much better for the Estate to give the land for a mere nominal sum were the company to bring their line on the north of the Tivy between Pontrhydfendigaid and Tregaron instead of the south side as at present intended, and it would be a better line also but perhaps a little more expensive to make.

On the farms alluded to namely, Maesllyn, Maeselwad, Alltdu, Old Abbey, and Wernfelin. There is so very little dry corn land and that is the very part the railway destroys leaving only narrow slips on both sides the railway that these farms in the aggregate will not be worth as much rent by £100 to £150 a year – no triffling sum.

I wish you would be so good as to communicate with the company’s solicitors on the subject.

Nearly a year and a half later, the same person sent another letter to the solicitors saying that the rail route problem had been resolved :

It gives me great pleasure to inform you that the railway business has been settled and . . . is satisfactory to all parties. You will observe from the alterations in red ink that the price of  all the land required for the purpose of the railway is fixed at £45 an acre and I think a very good price taking everything into account.

There are a couple of short paragraphs referring to a few clauses in what appears to be a draft agreement. The  last paragraph urges a C. Pracbe (?) Esq  to have the agreement signed and sealed as soon as possible :

The engineer is to make a proper plan of the deviation . . . and send it to me for inspection and which I will send on to you. But as Mr Davies (that must be Mr David Davies, Llandinam) says you should at once draw out the agreement and get the company’s seal to it – I have sent you the agreement so as no delay may be on that account

I shall be glad to hear what you think of the agreement and the price for land.

‘Satisfactory to all parties’ probably meant that M & M was able to negotiate a reasonable price for all the land between Tregaron and Aberystwyth, most of which was owned by Lord Lisburne. Lord Lisburne, on the other hand, probably influenced M & M’s choice of route all the way to Aberystwyth – so as to minimize the effect on his farms between Maesllyn and Pontrhydfendigaid and, also, on his own Trawscoed mansion.

It seem worth mentioning, that while Lord Lisburne may have reached an amicable agreement with M & M on the course of the railroad, he was at loggerheads with the company about the name – Strata Florida station. He was adamant that it should be called Ystrad Meurig. However that was a battle he lost.

Finally, as every local person knows, the section north of Ystrad Meurig to Llanidloes was never built partly because M & M ran out of money and, also, it was feared that laying a rail-track through this mountaious land would turn out to be an engineering nightmare. Following the completion of the railway to Aberystwyth, David Davies was reported to have said at a celebratory dinner for his labourers :

You must not think that I am hard with you because I will not go on to finish the old railway over the hills to Llanidloes. You say it wants finishing; so it does, but we must see our way where to get the money from because, perhaps, if it was done it would not pay, and then where would be the result to you and me.

Thus ended the dream of a direct line all the way from Manchester to Milford Haven.

Click here to read a ballad written in 1866, describing the rail-journey from Carmarthen to Strata Florida station