John Leland was born in London and educated at St. Paul’s School and Christ’s College, Cambridge. In 1533, he was appointed King’s Antiquarian and authorized by King Henry VIII to have access to all the libraries of Cathedrals, Abbeys and Priories. He visited Ystrad Fflur (Strata Florida abbey) around the time when the Cistercian religious life in Wales was about to end (around 1536/9).

John Leland and his visit to Ystrad Fflur

John Leland visited Ystrad Fflur (Strata Florida abbey) around the time when the Cistercian religious life in Wales was about to end (around 1536/9). He wrote a detailed description of the decaying monastery, its estates, lead mines, inland fisheries and the surrounding landscape. All of his observations are interesting, but the excerpts included below are confined to those which help to give a hint of what the region was like in the early sixteenth century. Unfortunately, Leland was not sufficiently inspired to write much about the people living and working in the area. Maybe, the language (Welsh) or his own grand background had some bearing on this indifference.

He was born in London and educated at St. Paul’s School and Christ’s College, Cambridge. In 1533, he was appointed King’s Antiquarian and authorized by King Henry VIII to have access to the libraries of Cathedrals, Abbeys, Priories and any other places where records and ancient writings were stored. To complete his task he travelled widely throughout England and Wales, collecting and transcribing many documents which, probably, would have been lost, or dispersed, particular, those of the monasteries. In his travels he collected masses of historical and geographical data for a book which he intended to publish under the name ‘History and Antiquities’. Sadly, this was never completed and he was certified insane in 1550 ; he died two years later. His records, however, did survive and an account of his travels ‘Itinerary of John Leland’ (edited by L Tomlinson Smith) was published in five volumes in 1908.

It is worth noting that Leland is very variable in his spelling ― he, certainly, did not believe in any form of consistency 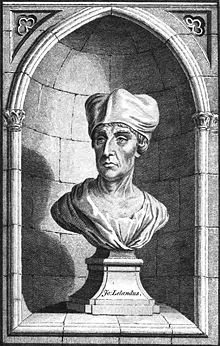 Line engraving by Charles Grignion the Elder (1772), purportedly taken from a bust of John Leland at All Souls College, Oxford.

The Journey to Strata Florida

On his way to Strata Florida, John Leland travelled along the edge of Cors Caron where he saw people digging peat. In the middle ages, peat was an important source of fuel, and in the heyday of the Abbey, digging peat would, probably, have been something of an industrial activity run by the monks. However, when Leland passed by, it was around the time of Strata Florida’s demise and, probably, what he saw was just ad hoc digging by local inhabitants. Leland described the bog, in his own inimitable way, as :

. . . a great fenny more, owt of the wich the inhabitantes therabout digge turfes for fier

Fortunately, Leland made copious notes describing the geographical features of the area surrounding the Abbey. This, of course, is the landscape of Pontrhydfendigaid and is an important contribution to the history of the village as well as the Abbey. The latter, he said was :

. . . set round about with montanes not far distant, except on the west parte, wher Diffrin Tyue is. Many hilles therabout hath bene well woodeid, as evidently by old rotes apperith, but now is almost no woode…The causses be these : first the wood cut doun was never copisid, and this hath beene a great cause of destruction of wood thorough Wales. Secondly after cutting doun of woodys the gottys hath so bytten the young spring that it never grew but lyke shrubbes. Thirddely men from the nonys destroied the great woodis that thei shuld not harborow theves.

The woodland was actually cut back and the landscape changed in the late thirteenth century, when Edward I was battling to exert a stranglehold on the people of Wales. This part of the country, and in particular, this locality was seen as a hot-bed of Welsh patriotism, of resistance and guerilla activities [1] and a major threat to royal forces. In 1278, Edward instructed the monks of Strata Florida to clear the major routes and passages through the woods to reduce the opportunities for ambush and surprise attack.

Of the cemetery bordering the Abbey, Leland had this to say :

The coemiteri wherein the cunteri about doth buri is veri large, and meanely wallid with stone. In it be xxxix hűe tr

According to Leyland, there were 39 yew trees – imposing and an outstanding feature of the cemetry. Nearly five hundred years on, it is still being used by the “country about” to inter its dead. In its prime it was, undoubtedly, much larger in size than today. By now, only one yew tree is still standing ― the one yew tree under which the renowned Dafydd ap Gwylim is buried. 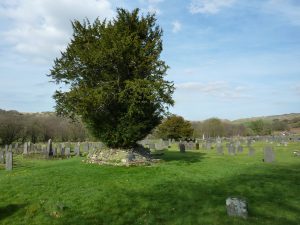 The cemetry to-day and the one remaining yew tree under which Dafydd ap Gwilym is buried.

A visit to Teifi Polls

Having spent time at Strata Florida, Leland proceeded to Teifi Pools, and judging from what he wrote in his diary, he was not  over impressed with the scenery : 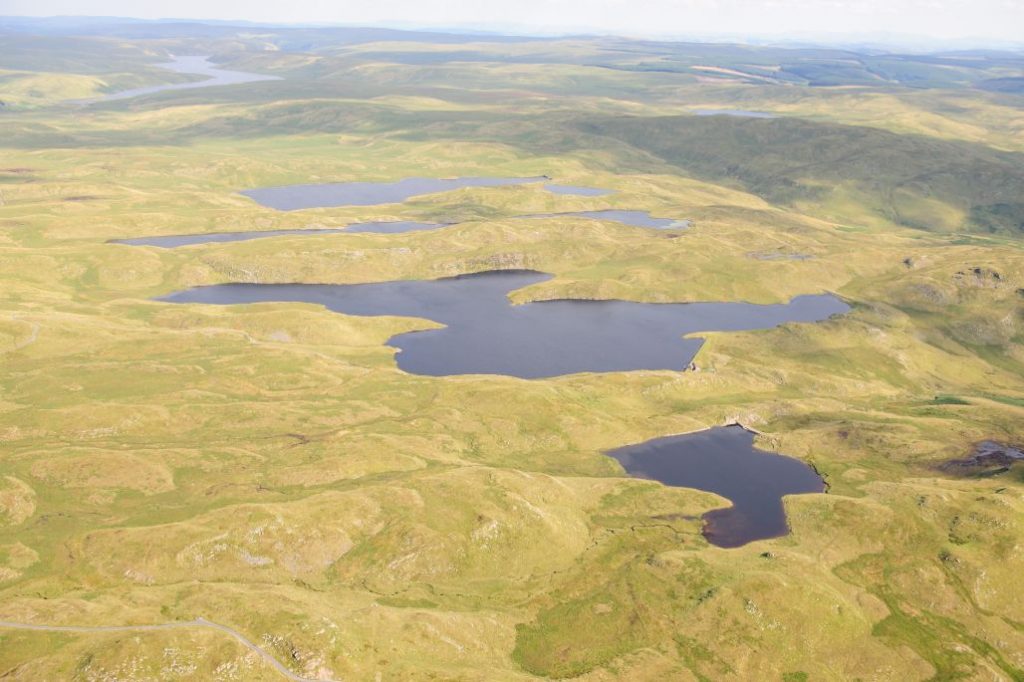 Of al the pooles none stondith is so rokky and stony soile as Tyve doth, that hath withyn hym many stonis. The ground al round Tyve and a great Miles of toward Stratfler is horrible with the sighte of bare stonis, as Cregeryri Mountains be. Llin Tyve is fed fro hyer places with a small broket, and issueth out again by a smaulle gut. Ther is in it veri good troutes and elys, and no other fisch.

From Llyn Teifi he went on to Carreg naw-llyn, a large stone or boulder from where it is possible to see nine lakes. This stone is still in the same place, sited about two miles above Teifi Pools, and its existence is well known in the neighbourhood :

. . . and ii miles beyound hit (Teify Pool) to Cregnaulin. If I had goone from thens a mile . . . to a hy hille I might have sene Penlinmon, then distant a v miles. The hilles bytwyxt Llynne Tyue and Cragnaugllin were not in sight so stony as the hilles bytwyst Stratfler and Llin Tyue . . . I Standing on Creggenaugllin so in no place within sight no wood but al hilly pastures . . .

From this vantage point, Leland could see Llyn Egnant, about which he made an interesting comment ; the trout on the south side were red as salmon, but white on the west side :

From Carduy to Cragnaullin is a good mile by Est, and standing by a stone on the top of this hille I saw v poolis by south west, whereof the biggest is LLin Heligna, shorter Lignante (Llyn Egnant), having no other fisch but trouttes and elys. One side of the poole, that is the south side, hath trouttes as redde as salmon. The west side hath white, as likewise hath LLin Tyue. This pole is seene to be fedde with no brooke, and hath a brooke issuing out of hym of his oune name, and cummith into Tyue in the west side of Tyue half a mile above Stradfler.

Fish and eels were an important source of fresh protein for the Cisterians and it is reasonable to assume that the monks of Ystrad Fflur devoted some time to developing the stock in Llynnoedd Teifi. According to D.C. Rees (writing in 1936), Llyn Berwyn, a lake with peat coloured water situated in the mountains above Tregaron [2], has :

. . . fine but capricious trout. . . a species . . . different from that found in the Teify, and it is probable that the lake was stocked with this peculiar trout many centuries ago by the monks of Strata Florida Abbey.

However, it is unlikely that the inhabitants of the Abbey had anything to do with the colour of the trout in Llyn Egnant. This could have been a feature of the surrounding land. One side of this lake is very boggy and peaty while the other is rocky and stony (like Llyn Teifi), and, it is possible that these traits may have contributed to the slightly different shades of pigmentation observed by Leland. It is worth mentioning that this seems to be the only reference to red and white’ trout sharing the waters of Llyn Egnant.

After Strata Florida and Teifi Pools

Altogether, Leland listed fifteen lakes either wholly or partly within the domain of Strata Florida [2], and having surveyed most of them he returned to Strata Florida before resuming his journey north :

Reading Leland’s Itinerary, adds an extra dimension to one’s general impression of the area around Pontrhydfendigaid and it helps to appreciate how things have changed, or not changed, over time. Even professional historians recognize that Leland’s observations and contribution are important in helping to unravel the past, for instance, David H. Williams says our knowledge of the inland fisheries of Strata Florida is much amplified by the antiquary, John Leland’s description of the Teify Pools [1].