Life after prison for Rhys Williams

Sometime around 1882 Rhys Williams moved to Tycanol to work as a shepherd for William Jones Wernfelen [18] and subsequently for his widow Margaret Jones.  Wernfelen was (and still is) one of the principal lowland farms near Pontrhydfendigaid and Tycanol was one of its outlying sheep farms on Elenydd. The latter was situated in Cwm Mwyro (the valley of the river Mwyro), about two to three miles east of Strata Florida (see map).

In the summer of 1875, Rhys Williams was sentenced to two months in Brecon’s House of Correction for wounding Hugh Jones, a shepherd working for Mr E.D. Thomas and Mr R.M. Hope (page 3). He was discharged from prison about a fortnight following a routine visit by the Rev Hugh Bold, a local magistrate, (page 4) who wrote in the ‘Visiting Magistrate Journal’ :

Visited the prison and found everything in good order and the prisoners – 31 – all well and orderly.

Rev Bold’s written words would have sounded pretty hollow to Rhys Williams ― his time in prison must have been quite harrowing. However, he appears not to have dwelt too much on his unfortunate experience ; following his release he went back to shepherding and, soon afterwards, he was living at Nant-yr-hwch (Llanddewi Abergwesyn) – still employed by John Jones of Nantstalwen

Roughly a year later, (in 1876) he married Mary Evans,  the daughter of David and Ann Evans of Gwarallt, Tregaron. She was then eighteen year of age and she joined him at Nant-yr-hwch (Lllanddewi Abergesyn) where he was now being assisted by a young agricultural servant. Rhys Williams must have been very well thought of by his emplyer – he had a place place to live and the prospect of a  secure emplyment. Not a bad way to start married life in the mid 1800s.

Their first child was born when Mary Williams was around 21, and she named him after her father (David or Dafydd). Sadly, there is no record of him in any subsequent census returns and one must presume that he died before the family moved from Nant-yr-hwch.

Sometime around 1881/2 (?), Rhys Williams moved to Tycanol to work (still as a shepherd) for William Jones Wernfelen [18] and subsequently for his widow Margaret Jones. Wernfelen was (and still is) one of the principal lowland farms near Pontrhydfendigaid, and Tycanol was one of its outlying sheep farms on Elenydd. The latter was situated in Cwm Mwyro (the valley of the river Mwyro), about two to three miles east of Strata Florida (see map). Its sheep walk boundaries were more settled than those at Nantstawen and, as a  consequence, there was less conflict over grazing rights.

Tycanol also had a well built hill-farm house – a solid stone structure which was quite spacious for a shepherd’s home and, what’s more, it was situated within walking distance of a school (at Strata Florida) and a place of worship (a Methodist chapel in Cwm Mwyro). Maybe, these were some of the attractions for Rhys and Mary ― like most local married couples, in those days, they were probably contemplating a large family and these were important considerations. 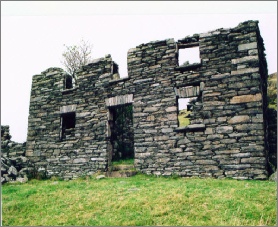 On the other hand, Rhys Williams may well have been offered a string of other temptations to entice him away from Nant-yr-hwch. In those days, a good shepherd was crucial for a north Cardiganshire tenant farmer such as William Jones. ― as Sir S.M. Meyrick explains in his book on the history of the county [19} :

The rents are paid by the sale of cattle and horses bread on the farm, and on the uncertain profits of . . . some distant sheep walks on the surrounding hills . . . which much depend on the mildness of the winters . . . and the fidelity of the shepherd . . .

The word fidelity seems to sum up Rhys Williams’ undoubted qualities – loyalty, reliability, trustworthiness, dependability, and commitment – qualities that would appeal to any employer.

It is interesting to note that around the same time that Rhys Williams moved from Nant-yr-hwch, John Jones of Nantstalwen moved to Cilpyll in the parish of Nantcwnlle. He inherited Cilpyll and, although it was a substantial low-land farm, he still retained his hill-farm tenancies, and in the 1881 census he was described as a farmer with 6700 acres of land, employing nine shepherds. The bulk of this land must have been Elenydd sheep-walks  extending from Esgair Garthen down to Nantstalwen and Nant-yr-hwch.

At Nantcwnlle, John Jones became a well known public figure. He was a J.P. and was elected as County Councillor in 1889. Following the marriage of one of his daughters to a J.D. Edwards he ‘set-up’ his new son-in-law at Nantstalwen. It is known that J.D. Edwards was still farming there in the 1920s, and, in fact, the place remained in the hands of the Edwards-family up until the early 1960s.

To return to Rhys Williams – it seems that Rhys and Mary Williams began life at Tycanol as a child-less couple. However,  Elizabeth (Liza) was born soon after they arrived in Cwm Mwyro and, two to three years later, they had a son which they, understandably, named David (Dafydd) after the child which they had lost (and, of course, after Mary’s father). Of the seven surviving children, Thomas Williams who was the youngest ― 14 to 15 years younger than Elizabeth the eldest. The children’s names were :

By the turn of the century (1901) two of the above had left home ; Liza was working at Frongoch with William and Sarah Roberts, but little is known about David Williams’ (Dafydd Williams) whereabouts at this time.

The life story of Rhys Williams would not be complete without some reference to his wife Mary, and her family background. Her parents were David and Anne Evans and she was born and brought up at Gwarallt, Tregaron. She was one of eight children (opposite)

Elizabeth, Mary’s younger sister (born around 1857), died when she was 4 years old on the 8th April 1861 and is buried at Bwlchgwynt cemetery, Tregaron. On the gravestone are the following touching words (in Welsh) :

Eizabeth the youngest played a key role in the history of Gwarallt and the family. When her mother died on the 2nd October 1886 at 60 years of age the records show that Elizabeth  returned to live at Gwarallt.  At the time, she was the only single daughter, and maybe she felt it was her duty to return home to look after her father. By now, all the boys had left for far-off places ; Josuah, in 1901, was Foreman of the Blast Furnace at Ebbw Vale and the others (as far as it is possible to tell) had moved to the south Wales coalfields

Just before the turn of the century (21st November 1899), David Evans her father died leaving Elizabeth Evans as the sole person in Gwarallt, the family home. The 1901 census describes her as a single person, 38 years of  age, and a farmer living on her own account. She remained a single woman for another 15 years, or so, before marrying a David Edwards (or Dafydd Edwards). When she died in 1934, at the age of 72, she was buried with her parents, and on the gravestone is written :

Hill pasture south-east of Tregaron
The distant clump of trees surrounds what remains of  Gwarallt today.  Click  image  to see the original

It would be interesting to trace and record the story of Gwarallt following Elizabeth’s marriage – what happened to her afterwards, and when did David Williams (or Dafydd Williams, Mary and Rhys Williams’ eldest son and Elizabeth’s nephew) succeed her at Gwarallt?  But that is another story and is too much of a diversion at this point – the emphasis here is on Rhys and Mary Williams.