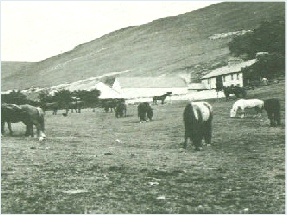 Field opposite Nantatalwen  house on the farm’s sheep sheering day

The way of  life of mid Wales shepherds could be lonely and hard .  Little is known about it outside farming.

Rhys Williams left Hafodnewydd, soon after his 21st birthday, to become a full time shepherd at Nantstalwen (in the parish of Llanddewi Abergwesyn, Breconshire). His employer was Mr John Jones, who was involved in the so called ‘Agrarian Outrage’ at Esgair-garthen (see page 1).

Judging from Mr John Jones’ role in that unrest, he was a man who was willing, sometimes, to employ pretty aggressive measures to shepherd his property.(or what he perceived to be his property). Doubtless, in some instances, his actions were triggered by pressure from his landlord (the Nanteos estate) ― to extend the bounds of the estate by encroaching on as many bits of open-mountain as possible.

Boundary disputes were common and frequent at the time, and it was almost impossible for anyone working for Mr John Jones not to get involved in some ‘border-disagreement’ or other. In fact, it was one such disagreement that, eventually, got Rhys Williams into serious trouble with the law.

On the 21st of June 1875, Rhys Williams was charged at Builth Police Court with wounding Hugh Jones (a low-land shepherd) at a place which The Brecon County Times [6] called Llanerchirfon. The Times described the incident as a ‘A  SHOCKING BRUTALITY’ and another newspaper referred to Rhys Williams as a ‘DANGEROUS SHEPHERD’.

There is no place called Llanerchirfon in Breconshire, but there is a Llanerch-yrfa which is situated “next door” to Esagair-irfon. It seems the County Times got things mixed up and the incident, in fact,  took place at Llanerch-yrfa. Llanerch-yrfa is close to the Devil’s Staircase on the road from Nantstalwen to Abergwesyn, and a likely place where the two shepherds could have ‘bumped into each other’.  Click the image to  see the relative positions of the above-mentioned places.

The County Times reported the court proceedings in rather vivid and detailed manner :

On the 24th of May last, about noon, I saw Rees Williams driving some sheep that I look after. I went to meet him, and asked him where he was going to take them. He began to curse, and accused me of coursing his sheep that morning. He was on a pony. He came onto me and asked me to strike him, and brushed his pony against me. I touched the pony with the stick that I had in my hand. He then got off the pony and pulled out a knife and threatened me. The knife he put back into his pocket and pushed against me again, and I tripped him up. When the defendant got up he struck me down with my stick. I was quite insensible for a time. When I came to myself I found the defendant was trying to gouge out my right eye with his finger. I was then on my back under him. He bit my two cheeks. He had hold of my right ear for some time, and tried to tear my lip. I bit his finger when he put it in my mouth (defendant’s left hand bore severe marks as of biting). He gouged my two eyes till I was quite blind with blood. I tried to get up, but defendant prevented me. He put his finger in my mouth again to tear my lip, and I bit it as hard as I could. He then begged of me to loose him and said he would go away. I loosed him, but instead of going away defendant struck me again in the face with his fists repeatedly. I was covered with blood and had great difficulty in getting home, because I was almost blinded. A doctor was telegraphed for, and he attended the same night . . . The doctor gave testimony of the fearful injuries which the complainant had received.

North Ceredigion estates were always eager to increase the extent of their holdings, and engaged in legal and illegal enclosure of Crown waste land. Land enclosure on Elenydd was at a peak in the late 18th and early 19th centuries [7]

Like the ‘Agrarian Outrage’, this was an incident about boundaries and grazing rights on upland areas. As indicated earlier, there was nothing unusual in this in the 19th century ; there were frequent disagreements between mountain sheep-farmers but, more often, between mountain people and low-land farmers. It is true that the latter, in many instances, had good reasons to feel aggrieved, but, on the other hand, they, in turn, never could accept that a great deal of what was, once, ‘common waste’ had been legally enclosed by Acts of Parliament – the main recipients being the Nanteos, Crosswood, Hafod and Gogerddan estates.

However, low-land farmers always maintained that these powerful and influential landowners were greedy and ruthless ; that they were also corrupt and dishonest when it came to interpreting legally deeded boundaries. Understandably, for much of the 19th century, land enclosure and its enforcement were often accompanied by fierce local resistance, resulting sometimes in violent behaviour.

Evan Jones in his book ‘Cymdogaeth Soar-y-mynydd’ [8] refers to this on-going conflict between the two farming communities, and to ‘government intervention’ in the 1880s to resolve some of the issues by defining boundaries more exactly. This led to some overall improvement, but the problem did not go away entirely until well into the 20th century.

Clearly, given the circumstances on Elenydd at this particular time, conflict was inherent and for those shepherds employed on the mountains, this was an occupational hazard. They were, literally, at the sharp end of things and had the unenviable task of ‘shepherding’ poorly defined and, often, questionable boundary lines. David Williams in his book ‘The Rebecca Riots’ [9], said, rather uncharitably, that the big estates and their tenants:

. . . employed shepherds on account of their prowess as bullies. These were the men who  ‘coursed’ the sheep of their rivals with dogs, drove them into torrents, kicked them until their ribs were broken, or scattered them irrecoverably over the moorlands.

Erwyd Howells  refers to the old highland shepherds as  ‘Good Men and True’, and while admitting that there were some unpleasant incidents, he warns his readers against being too judgemental about life on the open hills [10]. While :

. . .  there were many quarrels as regards boundaries and the coursing of neighbour’s sheep, which were sore points in many areas – often leading to threats and sometimes fights  . . .  It is easy to be judgemental in this day and age of behaviour when most hills are under a stock proof fence, but to keep an open hill under control years ago you had be quite a strong character.

Erwyd Howells was much more generous (and probably closer to the truth) in his portrayal of this solitary group of people. He referred to them as ‘Good Men and True’, and while admitting that there were some unpleasant incidents, he warns his readers against being too judgemental [10] :

Just in case I have painted too rosy a picture about shepherding life on the open hills, I would like to point out that there were many quarrels as regards boundaries and the coursing of neighbour’s sheep, which were sore points in many areas – often leading to threats and sometimes fights . . . It is easy to be judgemental in this day and age of behaviour when most hills are under a stock proof fence, but to keep an open hill under control years ago you had be quite a strong character.

Rhys Williams was certainly a ‘strong character’ and made of pretty stern stuff,  but he was not really a violent man. However, there were very few shepherds on Elenydd who could steer clear of ‘land-squabbles’ in the 19th century ; in this particular case, the disagreement was, essentially, between Nantstalwen and farmers east of the Irfon river. Evan Jones actually alludes to the Esgair-ochr-draw-i-Irfon (the hillside on the other side of the Irfon river) and implies (without giving very much detail) that Nantstawen actually acquired this land by some rather ‘doubtful means’ [11].

The Welsh word esgair refers to a track of land on which sheep are pastured. Elenydd is very much divided into Esgeirydd (plural) which  are essentially raised strips of open land  or ridges dotted over  the whole of the mountain range (see opposite image).

Maybe Rhys Williams was guilty of over-reacting on Llanerch-yrfa on that fateful day, but he was, almost certainly,  provoked ; initially, according to Hugh Jones’ own testimony, the encounter was little more than a bit of posturing between two shepherds and things only started to get out of hand after he, Hugh Jones, tripped Rhys Williams.  Hugh Jones also said ‘I went to meet him’  suggesting, perhaps, that he was looking for a showdown on that particular day. However, it is unlikely that he expected things to escalate to the extent that they did. As indicated, things started off as a bit of an innocuous scuffle – a bit of ‘tit for tat’, that is, if you hit me, I’ll do the same to you. They were both young, hot-headed men (in their mid-twenties) and things simply got out of control. When it ended, both combatants could show the scars of battle, but one person’s pride was, possibly, badly dented. Most quarrels and fights, such as this, never really progressed to court, but this one did, and it is interesting to examine why.

To read about the outcome of the court case, click here or Page 3 below.