Rhys Williams came from a long line of Elenydd shepherds. His father and grandfather were both named Rhys and it is known that the family had been shepherding on the Elenydd mountains since the turn of the eighteenth century. There is no concrete proof, but it is very likely that the family links with Elenydd go back well beyond that point, to the time when Edward Richard of Ystrad Meurig (1714–1777) was writing his pastoral songs (bugeilgerddi) – about the shepherds on the hills above Strata Florida. [21]

Rhys Williams (senior) left Towy fechan (the family home for well over 50 years) sometime in the 1860s when he and his wife were in their sixties. They moved to Cornwall, a place which was situated near the Great Abbey farm at Strata Florida. The old man was still gainfully employed as a shepherd, probably, by Thomas Arch, the tenant farmer of the Abbey farm and an Estate Agent and Manager for the Powells of Nanteos. Ten years on and the situation was unchanged, with Rhys Williams  (senior) continuing to work as a shepherd. However, following his wife’s death sometime in the 1880s, he moved to Tycanol to be with his son, and he was there (registered as a retired shepherd) until he died beginning of the year 1891 at about 83 years of age. 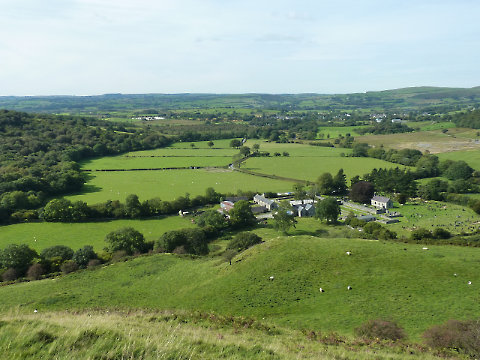 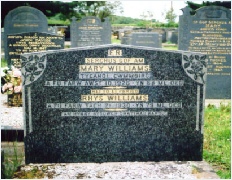 Like his father, Rhys Williams made only one big move ― from Nant-yr-hwch to Tycanol. The latter became his family home and, according to hearsay, he had no real desire to go anywhere else ; he was always quietly satisfied and contented with his lot. For most of his retirement years, he lived with his son William (Billy) and his wife, still at the family home. However, his last year or so was spent at Pontrhydfendigaid with his youngest son Thomas (Tom) and his wife Sarah. He died  in 1930 at the age of 80(?) and was buried at Strata Florida with his wife Mary, who had passed away some four years earlier.

Rhys Williams must have known every plateau, valley and gorge on Elenydd and experienced all the varied moods of that mountain range – from the cool and gentle winds of a warm summer day to the violent and uncompromising elements of winter months. He was one of those highly skilled people who did not rise to fame but who, nevertheless, played a prominent role within his own sphere – a sparsely populated sphere, distinguished by its land use, social and economic traits and, of course, its rich cultural history. Attending school was never an option for Rhys Williams and he was not an intellect, but, his knowledge and understanding of his own environment was ‘second to none’. Judging from anecdotes passed down over the years by word of mouth, Rhys Williams possessed all the attributes expected of an Elenydd shepherd – extensive knowledge of the mountains and its stock, endurance, resourcefulness and self-reliance, strength of character and a robust constitution.

Rhys Williams’ story typifies that of a tiny, but distinctive group of people who, in the 19th century, carved out a living on one of the most isolated an inhospitable part of Wales. His story reflects what things were like on Elenydd some 100 to 150 years ago and what is written above is an attempt to record, in a small way, what is known about the life of Rhys Williams before it is all forgotten.