The Rhydfendigaid bridge was built in 1760

Edward Richard [1] wrote two songs about the village of Rhydfendigaid, or to be more precise, about the local bridge which spans the river Teifi. The latter flows westwards through the village, essentially, cutting it in half, and acting as a boundary between two adjacent parishes, plwyf Caron to the south and plwyf Gwnnws to the north.
Edward Richard’s first song was written in 1760 [2], shortly after it was decided to replace the initial wooden crossing with a single-arch, stone construction. Apparently, it was the representatives of the ruling Cardiganshire families  (Trawsgoed, Nanteos and Mabws) who approved this development and Edward Richard pays tribute to them in his song, He also urges the freeholders and the tenants of the two parishes to do likewise, and to show their loyalty and gratitude to these great families (https://hanesybont.uk/?page_id=3364)
At the time, this was a major development for this tiny, out-of-the-way hamlet, and, no doubt, a welcomed piece of good fortune for the inhabitants. The timing, however, is quite surprising, and the rationale underlpinning the decision is difficult to understand.  In the mid 18th century, stone bridges, anywhere outside main towns, were a rarity. Most crossings in rural Wales were made of wood ― they were easy to build and to maintain. Some major Welsh rivers had lengthy stretches with no crossings at all. According to Jevoise [3], there were no bridges to be found over the Towy between Llandeilo and Carmarthen until the end of the 18th century.
What’s more, traffic through Rhydfendigaid at the time must have been minimal ― hardly enough to justify a substantial investment in a new crossing. Why this development was  considered at all is baffling. The cost [2] was a significant drain on Cardiganshire’s meagre finances, and there were no obvious benefits for the county. At the time, Cardiganshire was considered to be the most remote shire in Wales and, certainly, not on many people’s ‘must-visit’ list. Furthermore, the north-east corner of Cardiganshire was sparsely populated and villages such as Rhydfendigaid, bordering the Elenydd mountains, were among the remotest and most isolated places in the whole of the British Isles. A typical expanse of the Elenydd range is shown opposite. An isolated dwelling called Claerddu (now a bothy) can be seen in a distant, secluded refuge 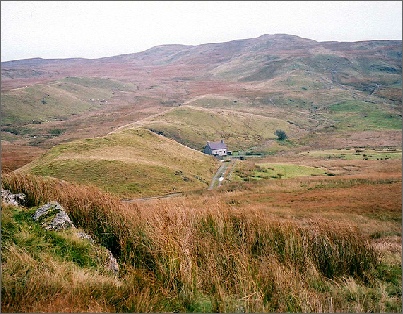 Improving communications in this part of the county was hardly going to change many people’s lives. The only traffic through the village was that of local inhabitants, and they were thin on the ground. There were no prominent landed gentry living close to the village to insist on a decent access to their stately homes.  Following the death of the last of the Stedman dynasty in 1747, the only notable mansion close to the village (see the 1741 drawing below) soon lapsed into a common farmhouse 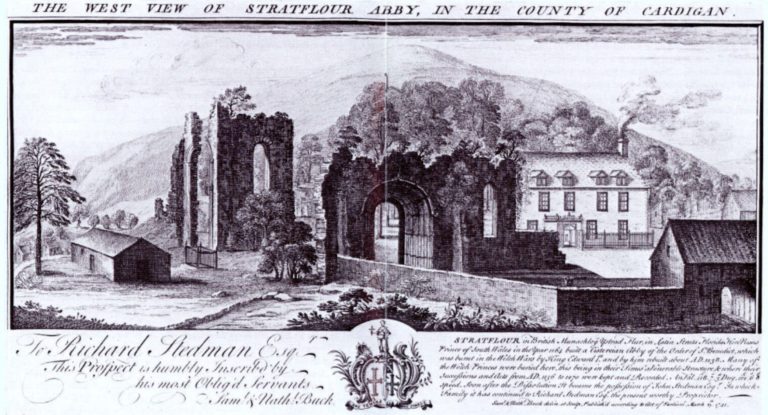 There is no evidence of many 18th century travellers being attracted to the area ; most tourist of that era preferred to go abroad. Following John Leland’s sojourn to the Cistercian abbey of Strata Florida around 1536, there is no record of anyone of significance visiting the region – not until the end of the century. Tours to the ruins of the abbey by well-to-do Englishmen only became popular towards the mid 19th century, roughly a hundred years after the bridge was built.

The geographical remoteness of the area and the limited traffic meant that the roads received little attention or care. In winter, most  were wet and muddy or buried in snow, while in summer they were littered with huge potholes. Those which cut across mountain slopes were, usually, when dry, just a mass of projecting rocks, hard, dusty and uneven. In reality, the upland roads around Rhydfendigaid were nothing more than rough tracks and bridle-paths. Bearing in mind that the ‘Little Ice Age’ was at its peak around 1750 (which meant long winters and short summers), travelling in this area, for much of the year, was a hazardous business ; a journey longer than a few miles was something not to be embarked upon lightly.

In fact, most roads in Cardiganshire were in a state of neglect and only suitable for walking, riding a horse or pony, or moving goods by pack-animals. In addition to poor surfaces, they were full of twists, turns and steep gradients and, hopelessly, unsuitable for wheeled vehicles. Not surprisingly, there were very few of the latter in the whole of  the county before about 1780 [4] :

There were very few wheeled vehicles in Ceredigion before about 1780. The majority of people walked, or rode on horses or ponies.

According to Daniel Defoe (1722) the coast roads, considered to be the best, had  muddy holes deep enough to bury man and horse [5] :

. . . most dangerous to travellers . . . sloughs sometimes able to bury both man and horse’

Some 50 years on, in 1774, H. P. Wyndham [6] found them not much improved and, also, not much used.  He met very few people on the roads and those he spoke to were ignorant of anywhere other than the nearest town :

The town of Llanarch consists of a few straggling cottages, but the name served us as a guide to Aberystwith : for we soon found it necessary, to be previously acquainted with every place in our route ; as we could seldom get any farther intelligence, from the few people we met on the road, than to the next town or village.

Clearly, if the coastal roads were deserted, then, the byroads leading to and from Rhydfendigaid were  hardly congested. At a guess, the population of Caron and Gwnnws was about 600 or less in the mid 18th century [7], with the majority of families living on small farms, smallholdings and poorly constructed cottages scattered over the area.  Rhydfendigaid village would have been, simply,  an undeveloped narrow strip of thatched houses on either side of the river, and extending over a distance of a mile or less. Assuming 15% of the people of Caron and Gwnnws actually lived within or very close to this narrow strip (i.e. within the ‘village boundary’), then this would amount to roughly 100 people and maybe around twenty to twenty-five houses [7]. This would hardly make the village a bustling place with much to-ing and fro-ing  over the ‘blessed ford’.
With road communications within the county so dismal, people of one part new next to nothing of the others. Generally, they rarely ventured further than a few miles from their own home patch ; they had no means of transport except on foot. Only the well-to-do (and there very few of those around Rhydfendigaid) could afford to travel on horseback.  The rest journeyed on foot, with the result that intercourse between the people of different districts was exceedingly limited at all times, but practically suspended during the winter season. Saunders Lewis thought that even Edward Richard, who had a wide circle of friends and the wherewithal to travel and socialize [8] :

. . . never in his life travelled further than to Carmarthen and to Radnorshire.

It is true that large quantities of lead-ore were bring transported in the mid 1700s to Aberystwyth, but it is doubtful that much tonnage actually passed through the village. The majority of the productive lead-mines were to the west or north of the river Teifi ― there would have been very few columns of pannier-laden ponies going through the village.
Admittedly, towards the middle of the 18th century, there were signs that the county gentry were waking up to the need for road improvements, but it was 1770 before the first couple of Turnpike Trusts were formed in Cardiganshire. Naturally, these Trust were interested only in the busiest and most important routes which ruled out any attention to those dirt-tracks in remote upland communities [9]. Yet, strangely,  ten years earlier, representatives of three ruling Cardiganshire families saw fit to invest a significant sum of county money to provide the remote and outlying village of Rhydfendigaid with a stone bridge. Why?

To read more about why a stone bridge was built in Bont in 1760, click Page 2