Letters written during a tour through south Wales

The early travel-writers were mostly English and, invariably, from a privileged background ;  they were well educated and very mindful of their social standing and national identity (English not British).

In general, the early travel writers [1], who ventured into the remote areas of north Ceredigion, were primarily interested in Devil’s Bridge,  Hafod, Ystrad Fflur and, to a lesser extent Ystrad Meurig and Teifi Pools. They wrote, mainly, about the local topography, the mansion and gardens of Hafod and the history of Ystrad Fflur. Rarely did they include any significant comments about local people and everyday life in this remote corner of the county.  Most were English and from a privileged background ;  they were, invariably, well educated and very mindful of their social standing and national identity (English not British).

Their written accounts of the county were heavily influenced by their own personal circumstances and experiences – for them, in particular, north-west Ceredigion was  very much part of a foreign country, whose inhabitants spoke little or no English. The place it seems was strange to them and very difficult to comprehend. They lacked empathy with the local inhabitants, the local life and the language and this may explain in part why they wrote only about things they could readily understand and identify with, that is, scenery, antiquities and ancient history.

John Evans was somewhat different. Unlike his contemporaries, he showed considerable interest in the disadvantaged rural population of Wales. For instance, his writings provide a rare insight to the families who lived near (or on) Elenydd’s open waste land, and upon which they ‘encroached’. These were the rural poor, the lower class of that period.  Gwallter Mechain  (1815) considered them to be an obstacle to agricultural improvement in Ceredigion [4] ; access to open, unenclosed land he said gave families :

. . . a kind of independence, which was too commonly the parent of indolence, in the lower class

John Evans was born in Lydney, Gloucestershire and was a graduate of Jesus College, Oxford. His name suggests a Welsh connection, and he certainly showed a keen interest in Wales. Unfortunately, little is known about  his personal life. He refers to Welsh speaking friends so he may have had some Welsh blood in his veins, but that is pure conjecture. 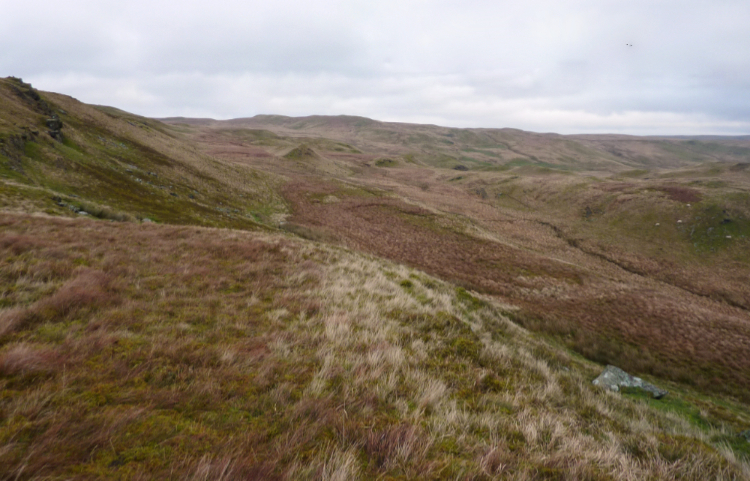 Elenydd is the largest and most remote area in the Cambrian Mountains. The west facing hills extend out to the Welsh speaking heartland of Ceredigion. It is on this side of Elenydd that the village of Pontrhydfendigaid stands – in the foothills near to the source of the river Teifi and the remains of the celebrated abbey of Strata Florida

It was a pretty harsh view indeed of people who, according to one modern historian [5] :

. . . responded to the physical and social constraints which inhibited their  region’s economic development with a variety of flexible strategies for family survival . . . localized solutions such as the development of squatter settlements on common and Crown lands and cottage textile production, as well as seasonal and short-term migration to more prosperous regions outside their native district.

First, as expected, John Evans made the mandatory visit to Hafod which he described as a delicious spot which they (himself and his friends) left with regret. From Hafod  he made his way to Ystrad Meurig via the bleak and dreary cwm Ispitty Ystwith. At Ystrad Meurig he paid a social call to Edward Richard’s old school and found it well endowed and in a flourishing condition.